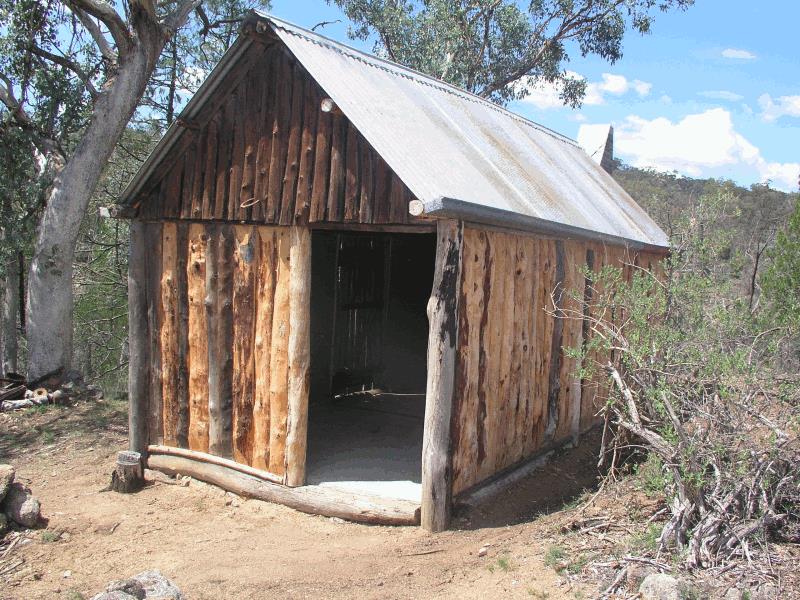 Located in the deep south of Byadbo, on the Devil's Hole Firetrail, below Paupong. Access is via Dalgetty, Beloka and Paupong. The hut can be reached by following the NP boundary FT or driving across a property.

Re-discovered in 2002 by Don Wellsmore and others interested in its restoration, Rugmans was built in 1932 by Charlie Rugman, who lived in the hut for 10 years until he died in the 1940s. He is buried at Beloco cemetary. The hut clearly had itinerant use in the 1970's.

Posts and a bottle dump nearby would indicate that this is the second hut on the site. Bottles dated 1931 and 1915 were found. Posts show a "sleep-out", byre and third shed were also built nearby. A horse yard and the remains of the byre are visible above the hut.

Immediately prior to the 2003 fires, local graziers apparently removed most of the hut materials, with the aim of re-building it in the future. Following the re-build, I received this note from NPWS - Brett McLennan:

I am writing to inform you that Charlie Rugman's hut on the Devils Hole firetrail has finally been restored following its removal pre-2003 fires by a concerned local. NPWS carpenter Uwe Petersohn spent many weeks rebuilding the hut using reclaimed cypress slabs and also cutting new replacement slabs from near by trees which died in the fires. A Heritage Action Statement (HAS) was undertaken prior to any works taking place and this involved considerable consultation with local including Rita Wroe, whose son Ray removed the hut fearing it would be burnt in 2003. The restoration included replacement of 3 corner posts, at least 2 ground plates and 2 wall panels of the new cypress slabs. The chimney was rebuilt using local stone collected by myself and installed by Uwe. The roof sheets are the originals. Some recycled guttering was used and a couple of matching lengths were added to fill the old tank. The interior floor was redone in the same technique as the original, thin mortar bed using stone pavers here and there. The interior lining was faithfully recreated using a paper card type lining, with a hessian overlay, for really good insulation! I have numerous photos of the hut if you need any more. Please find attached a couple of typical shots post restoration. I hope this helps you to update your files on a truly unique hut in KNP. Don' t hesitate to contact me for this or other huts in the Byadbo area.

The original hut was constructed with slab sides. The slabs are unique in KNP, being split poles from the nearby native pine, Callitris sp.

The floor is concrete, a later addition. Following the 2010 rebuild, the hut is in ecellent condition. Some furniture remains, including a set of storage shelves and an iron bed. The remains of a sprung double bed lie in the sleep-out.

A timber and wire fence remains around the perimeter. A few metres above the hut is a small stockyard, still in good repair, with a collapsed byre. A nearby wall of stones shows the probable location of a previous hut.

A water tank stands beside the hut, with a coating of chicken wire and cement added, to retain its waterproofness.