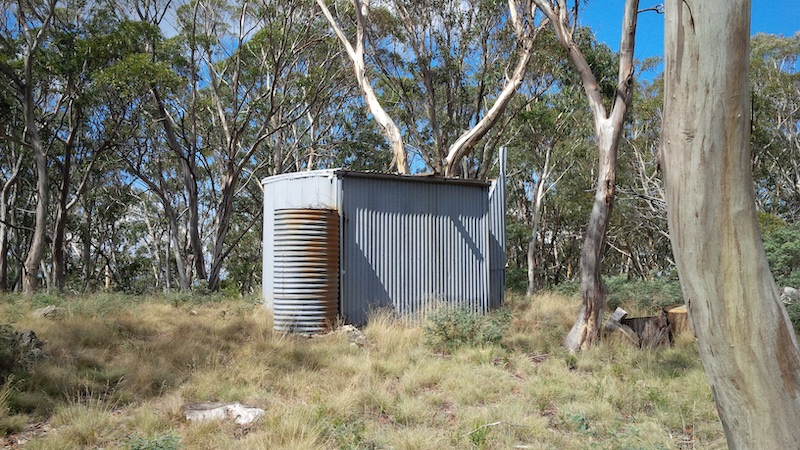 Located in the remote north of the Brindabella National Park NSW.

The hut has magnificent uninterrupted 360 degree views of the Brindabella ranges, Goodradigbee valley and Kosciuszko National Park, including the Bogong Peaks.

The galvanised iron Bag Range Hut, located on the summit of a peak of the northern Brindabella Ranges in NSW, served as a fire lookout during the ACT Bush Fire Council's lease over the area.  This hut was built by Ted Kennedy and is significant for the role it played in the history of detection and fighting of bushfires in the area during World War II.

"That a fire tower and hut was erected on Bag Range for fear of Japanese aircraft dropping incendiaries to start bushfires.  The tower with its adjacent shelter hut was staffed during the 1940's by Vince Oldfield and Billy Jemmett, alternately, each on 16-day shifts.

The fire tower system has been extended by the erection of two additional towers. The first of these is situated on Bag Range at an elevation of approximately 4,100 feet.  The site of the tower is approximately 18 miles from Stromlo by air line, but so inaccessible that it takes five hours to reach it on horseback from the nearest point on the Two Sticks road.

To overcome this difficulty of access a lookout man will be required to remain on duty over periods when fire danger is present, and a hut for his accommodation has been provided.

A portable radio transceiver set will be made available and a wind generating set has been installed to provide the necessary electric current for the set.

Members of the Cavan and Mullion Volunteer Fire Brigade made an invaluable labour contribution by felling trees which needed clearing."