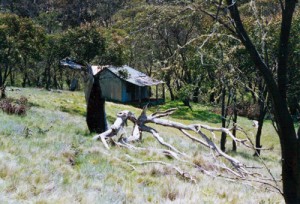 Townsend’s Hut figures as hugely significant in the memories of the Townsend family.

My father, Charles John Townsend, was known as Jack. It seemed to me as a youngster that all his friends were Jack or Bill! It is interesting that both names have returned. My eldest son is another Jack Townsend. He was born the year after Dad died.

Dad didn’t finish school until he was nineteen in 1931. He had missed some time because of a trip to North America but the main reason was that he repeated the last year at school to row for the third time in the St Ignatius First VIII. They hoped to win the Head of the River. Unfortunately that didn’t happen.

Sport reared its head again when his university course was interrupted when Dad fractured his skull playing reserve grade for Western Suburbs Rugby on ANZAC Day in 1934. ANZAC Day in 1934 was on a Wednesday. Dad had been knocked out in the game on the previous Saturday but still took the field four days later. This was probably not a wise decision. When Dad woke up in hospital he swore that the clock on the wall was going backwards.

In time he returned to Goulburn where his father Charlie Townsend, known to us as Pop, owned the racecourse. Pop had purchased the land to assist the Goulburn Racing Club which was struggling at the end of 1928. Dad became interested in working on the land at the racecourse. It was quite a few years before the Racing Club was in a financial position to reacquire the land.

In those years Pop ran the betting shop in Goulburn. Of course there was a Barber’s shop out the front however I gather that the standard of the hairdressing may have been a little unpredictable on occasions.. There was no such thing as a TAB in those days. The local police and the town worthies would bet with Pop but there would be the occasional visit from the “coppers” from Sydney. Pop as a licenced Bookmaker on the tracks needed to avoid a SP Bookie offence so Dad ended up before the courts on two occasions.

A combination of Dad’s interest in farming and Pop’s love of fishing in the mountains led to the Snow leases and the construction of Townsends’ Hut.

In the Snow lease days Pop and Dad would purchase 5000 Merino wethers from the Riverina each year. They would be transported to Goulburn and then driven into the snow lease using horses and dogs. After the summer they would be driven out of the mountains to be shorn and sold.

Dad’s stories of the building of the hut and the sheep yards on top of the hill behind the hut reflected tough days of hard labour. The timber for the yards was all cut by hand and much of it needed to be dragged and carried to the top of the hill.   Dad spoke of their collective consternation when they realised that the finished yards were much bigger than they needed to be!

Dad also loved the stories of fishing with Pop. Dad claimed he spent all the time cleaning Pop’s many fish. He rarely had a chance to “wet a line” himself.

Tex, the mighty Kelpie, also loomed large in Dad’s recollections of those days. Dad told of years when the snow came early and of the difficulty of moving the sheep through the snow. He spoke of Tex working until he was hoarse. At the end of the long day the dog was still going, his jaws were still moving but his bark was gone.

Tex the Kelpie was also fond of trout which was good as there was a ready supply. However Dad also spoke of Pop’s continuing horror when Bill Smith, who worked with them for years, insisted on smothering fresh trout with tomato sauce. Trout was a staple food and fresh bread was a rare luxury. “There is nothing like eating to reduce the appetite” Dad liked to say.

Dad loved the mountains in the summer. After the snow lease days we would go fishing and camping as often as we could manage. He loved a day walking and fishing on the ‘bidgee. We never caught much. The fishing wasn’t what it was in forties but Dad had had a lot more practice at cleaning fish than catching them in any case. We visited the hut on a number of occasions. We spent time searching the big hill behind the hut for some remains of the sheep yards. I put my big toe into the creek beside the hut where dad used to have his bath at the end of the day.

Dad was never so keen on the Mountains in the winter.  We lived close enough in Queanbeyan but we never went to the snow. Dad had not forgotten the difficulty of working and driving 5000 sheep through the white stuff. He could never understand the concept of going to the snow for fun!

In some ways it was a good thing that Dad wasn’t well enough to cross the Murrumbidgee and walk up to the hut on his last visit in 1987. From his distant viewpoint the hut was still nestled peacefully against the tree line and brought back rich memories for Dad of great times and some tough days. A closer inspection by those able to approach the hut revealed that the years, a wombat and unfortunately wilful destruction and graffiti by human visitors meant that it was in a terrible state.

Therefore you can imagine the gratitude that we feel towards Clive Richardson and the restitution team. The mountain huts are significant in our history and a useful refuge even today. But Townsend’s Hut holds a special place in our hearts.