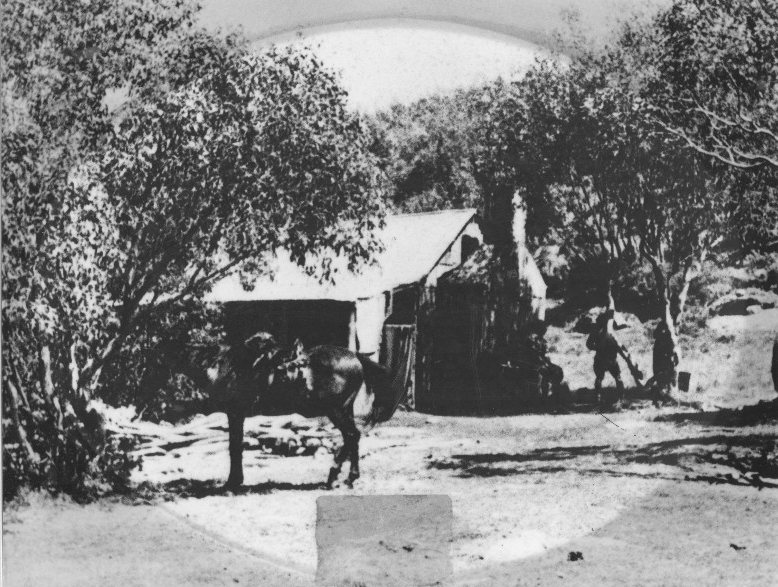 They bought the corrugated iron from Corryong by pack horse. The slabs cut of timber close by, outside chimney tin, also inside lined by granite rocks. The hearth flat granite rock and part of the lining area gravel. Timber table nailed onto wall with 2 legs driven into floor. Stools made out of timber also kero cans to sit on. Sleeping quarters of hut was slate floor. The bunks were made of tree Limbs, 4 poster, oat bags stretched across for base, chaff bags partly filled with chaff for mattresses, also pillows, size of bunks as queen size now attached to main building, another storerooms for chaff and oats rock salt, rail to hang saddles, bridles etc, and if extra men stayed they would sleep in that room on bags of chaff.

Outside toilet big hole, hessian draped around with swing door. Water supply from a well quite a distance away, had to be carried in kero tins with handle. There was a holding yard for stock horse pack horses made out of tree limbs and tied together up with wire, also a gallows for killing the beast. This hut was built on the gap where a number of brumbies perished in the snow, and has always been known as Dead Horse Gap.

Nankervis Bros had taken up leases for cattle summer grazing, had to have hut for stockmen to see to attend to cattle. They also built Cascade Hut much more primitive for the same reason only being used occasionally At the end of the snow season, Dad would get his pack bags out, they were made out of Hereford bullock hide, supported by steel frame, so if pack horse brushed a tree would not damage contents. These bags made by Geo. Day! The bag was attached to pack saddle. Dad's stockman's saddle consisted of saddle bag and a quart pot for the quick snack and billy tea when droving cattle or horses. My favourite saying - "wish I could go to the mountains with you"

I was 5 ½ years old and could ride horse bareback, as not allowed in saddle with stirrups. However must have pestered Dad and Mum so much about going to Dead Horse, Mum said I was too young to go alone and she'd have to come also. Dad decided to take stock horses and pack horses, a little food, blankets and etc up to Dead Horse and he would return in a week to get Mum and self. All week Mum busy again baking bread fruit cakes and biscuits and packing. I was counting the days and watching the gate for the week. True to his word Dad was back in a week. Leo Byatt was keeping an eye on the horses and cattle at Dead Horse, great stockman of the Mountains. Much excitement at "Tharoola" our home, next morning pack horse loaded, only 2 stock horses saddled, Dad's and the old chestnut that Mum used to harness and drive to Jindabyne 7 miles, also visit neighbours.

However, Mum was in saddle on Chestnut. Dad had cushion held on behind his saddle for me. We took off to "Tom's Place" Moonbah, Uncle Norman Mc Guffickes place. We stayed there over night. More cattle in the yard for trip to Dead Horse for summer grazing. So set off early with cattle, pack horse. This time I was on chestnut with Mum. We crossed the Moonbah River, through the hills onto Thredbo River and follow river up with many stops, as lush grass and clear cool water and spell for stock and riders, lunch packed sandwiches, and the best quart pot tea aroma of gum leaves Next rest area "Friday Flat" named by John McGufficke from Flisk Milan (his property).

The story goes like as such: John McGufficke and Dave Spencer , had cattle rounded up on the flat, waiting for his father W.J. McGufficke, his hired man Harry Rixon, to come with the stragglers. John looked up and saw them coming and remarked to Dave, here comes the boss and his man. Friday was the day, so decided to call flat Friday Flat. This area I remember very well, the cattle started to wander, onto the horses we got, Dad gave the pack horse to Mum, she being left handed, pulled pack horse to wrong side, lead got under chestnuts tail, he pig rooted off went Mum and self into the tussocks and both horses just stood there afterwards, horses are so human. I was so upset when Dad arrived back. I'd never fallen off a horse before, said I don't want to ride behind Mum again, which I didn't after arriving at Dead Horse. Leo was at Hut, helped unsaddle horses and packs, horses into yard rugged and fed chaff and oats and water. The fire fairly blazing, kero buckets water on hooks over fire and big pot of potatoes cooking in coals, steak grilled in front and tinned peas, finished with fruit cake and billy tea. Our lighting was a kerosene lantern if run out of kero, then candles. "Wish I could come to the mountains with you" My dream came true after pestering Dad and Mum about going to the Mountains. We had to ride and supplies on pack horses as no roads through there. Dead Horse Hut very comfortable with large open fire place. Beautiful views looking down the valley onto Friday Flat, where Thredbo Village is situated now The men would be up at daylight checking the cattle and counting if all there, always had rock salt near their camp, as mostly came to the one place at night. Mum and I would be out early to catch grass hoppers, before the sun too bright and we'd walk to the Thredbo, not far away, the trout very easy to catch, as not many people in the area those days. Some days we went riding with the men, every stream the horses would want to stop and have a drink. The water was crystal clear, and we'd get off and cup our hands to drink, or brim of the hat was a good way.

So exciting when the men arrived for the Brumby chase, Geo Day would arrive from Chalet always sweets for me. Bill McGufficke, Leo Byatt and Nankervis men. They'd kill a yearling, up before the flies and cut it up, would hang under gum tree covered by hessian and keep better than in a fridge. The men would be away all day chasing Brumbies, usually bought 2 or 3 at a time. Mum would be cooking dampers and jam tarts in camp oven most of the day. Next day handling and mouthing brumbies they became placid very quickly in yard with stock and pack horses, maybe one bad rogue amongst them. Usually around the Cascades Brumby area. Mum and I went on one chase so exciting, whips cracking men calling out after the group of horses found. Each year my school holidays, only one place to go Dead Horse Hut. I just loved that are of the Mountains, so much to do and see the beauty of nature.

Note: This story is reproduced in edited form in Klaus Hueneke's People of the High Country in his chapter "Women who didn't always stay at home".

When Rosemary Curry was interviewing Shirley's mother Emily McGufficke and aunt Gladys Weston Shirley for the small book "If that man comes here I'll shoot him" she encouraged Shirley to write down her own memories.